DOCUMENT: THE CITROEN PULLS IN MINIATURE We have already said everything about Citroën Traction Before: numerous works have been devoted to these cars with an exceptional destiny, the story has often been involved in the large. Whether military or civilian transport during the last war, multiple services under the occupation, or the famous GANG OF FRONT WHEEL DRIVE, who in his time, more than the headlines ...

Accomplice of the best and the worst, partner of General De Gaulle and Pierrot Le Fou, the legendary Traction now we will unveil its different aspects in the form that is most familiar to us, the earlier, the reduction to 1 / 43th.

We shall confine ourselves, however, in this study to examine only miniature "factory" that is to say beyond the stage productions of crafts; those that were normally distributed their time in toy stores, which excludes, for now, the many special models, kits and other transformations, so interesting and cared for are there, do not enter the circle enough closed "real"; those in specialty stores for special models, called "opportunities", and finally those that have been increasingly difficult to find in flea merchants, yet clever to renew a stock that tends, however, little small to run out. So let's see together some of the most interesting parts ...

This brand, often overlooked, not very collectionnée, does this not least some interest, especially as some of these variants have not been replicated elsewhere ...

This is the case of a rare taxi whose base plate is marked CITROEN 15CV this Minialuxe has small white headlights and large wheels cream, which is curious because there existed two main types of traction at this manufacturer: all plastic, of course. The first type sported big headlights (always white) and big wheels cream: the second type involved smaller headlights, also white, but smaller wheels, more proportionate to the size of the thumbnail; This shows that the taxi in question was a model "intermediate", reinforcing his interest; it is gray, has a TAXI signal and a brightly colored counter. Here is another interesting model as a gray Traction yet, but with motor ...

It is the only state on the base plate and not CITROEN 11CV 15CV; However, the body is the same but do not look at the accuracy Minialuxe, but an undeniable charm. It has small wheels cream and white lights; it is therefore for the second series.

However, the following model belongs to the first category, it is black, approaching this time of the most common color of the sedan model. It has large headlights and big wheels and pulls a funny trailer in which cattle could be a cow or a pig, it said without certainty. What is certain is that there were two types of trailers, the livestock type and that of the tarpaulin type. Now you have the chance to see a collection of extremely rare items; it is a box containing six cars of different colors! This box is so entitled, All these translations are of the big lights / big wheels, headlights are white, the orange-colored wheels. The six cars share a roof rack packed suitcases, they are of different color, depending on color model.
Traction yellow / black luggage / suitcases yellow
Traction black / gray rack / red suitcases
Traction pale blue / white gallery / pale blue suitcases
Traction orange / black luggage / suitcases orange
Red Traction / gallery black / red suitcases. The base plates are all marked Citroën 15CV. Note that all of these Pulls Minialuxe was probably manufactured in the years 1954-1955. However, emerged occurred around 1970 but then appeared some differences:
The last set, in effect, included windows, interior fittings, chrome wheels and a marked base plate 11CV.

There are basically two models produced by this company closely linked to the fortunes of Citroen. These Pulls have a base plate of sheet metal painted black and bear the inscription:

These are not 11HP 11HP light, so they perfectly complement the series of small 11HP Dinky Toys.

There are three colors, black, which has a glossy appearance and typical JRD flashing; that is to say, whose red paint sometimes extends far beyond the actual fires, blue gray, which differs from the previous only in color, and sometimes through the rear window, it also can vary from black to another black; and light gray. More interesting are the wheels variants. A black whose wheels are not JRD but CIJ .. They differ significantly from JRD wheels, which as we know are gray with a kind of small central dome, as the CIJ, chrome, are hollow with a kind of small outer rim (type pulley). If we can find a little difficulty JRD wheels of the same name, it is rare to find a JRD to CIJ wheels, they have probably been installed for a short time, when the "redemption" of JRD by CIJ.

Admittedly in fiftieth anniversary of the FWD as Dinky Citroën has contributed to the current image of the wheel; a long time ago, indeed as miniature Pulls Office of Bobigny are viewed with particular attention even by unsophisticated and that word is combined with Traction collectible Dinky Toys.

It was in 1934 that is unveiled in the huge store instead of Europe the first FWD Citroën André Citroën itself ... She then calls 7. It was in 1949 that 24N appears the type of Dinky Toys.

She will live only time a year this Traction 11BL which is characterized by its wheels in iron, painted black, his dark blue or metallic gray paint. Outside the wheels and blue color, this miniature is similar in all respects to its following, chronologically ... It sold in boxes of six, like all Traction other Dinky, as the first type has a small rear window, a spaced streaks grille, front bumper reported Sheet (quite fragile), a spare tire cover on the back, a small base plate engraving and the outlets spaced on the sides of the cover. 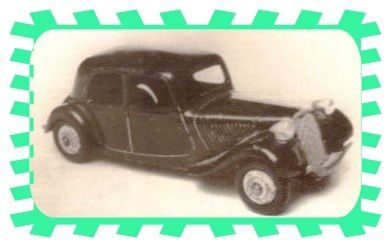 Its color may be a metallic gray combined with red or black wheels in zamac, or black with bright yellow wheels. This model with its tires "M" was sold from 1950 to 1951.

The same model, but with a larger rear window was sold in black paint / golden yellow or cream-wheel drive. This 11BL tires "M" was marketed in 1952.

One can also distinguish multiple versions within this type 2; the first includes all features of the proposed Dinky Pulls from 1953. The first version of the second type (1953-1955), still has a base plate in the fine print, it is black with cream wheels, the interior of the roof is smooth, tires are marked M, the rear window is great.

The second version is similar in all respects except for the interior of which roof is squared (1955).

With the following model appears a bigger etching the base plate, accompanied by a small rear window, always black / cream wheels (1956).

The latest model of this series has the same characteristics as the previous one but is finished in light gray with the wheels of the same color, or sometimes cream; this gray has nothing to do with the metallic applied to the first two Traction Dinky ... To complete the latest version was manufactured from 1957 to 1958.

Besides the black version / trunk / checkered roof, all Traction Dinky Toys are hard to find in perfect condition, the rarest must be the blue / iron wheels, followed by the gray metal / iron wheels and metallic gray / wheels red. But it is not easy to find a black spare tire when new ...

15 XIX predate the 11HP, there are two main colors but it is not excluded that other alternatives have emerged ... Let us examine the crisis, with its wide grille, June 15 cyl his monogram stamped on the back right and usually red wheels with white tires; this model is generally equipped with antenna side of the windshield on the left side. The base plate is painted black metal and bears the inscription "CITROEN 15 FAM SIX - Made in France - The miniature Norev." Black are similar in all respects, with the exception of the antenna which can be white or chrome. There are also two versions Police, depending on the same type 15, these miniatures are equipped with a roof signal "POLICE", an additional headlight, a rear antenna on the left and a red plate "POLICE" on each side. These 15 Police are generally black but there are a red variant, rare. The 11HP Norev existed in a wider choice of colors, but before we get there, let's talk about the 15 shades less widespread than those mentioned above ... The first round exit in 1954, also included a white model; further there is another variant of gray, still include the motor friction and those models, released in 1958 showing no entry 15 SIX on the right rear wing; it is also in 1958 there appeared a variant without 15 SIX antenna. The 11 thus have existed in various colors, but they do not show the same interest for the collector, as they were not contemporary vehicle. Outputs well after 15, they presented themselves as modern miniatures, the trunk opening (cached version spare), the hood opening in two parts on a motor shown very briefly and vaguely painted silver. remember that Norev has miniaturized the 1936 model; gray and black wheels shod with tires.

The interior is this: seats, dashboard, steering wheel, and these miniatures have a windshield with wipers and engraved mirror, two side windows and a rear window. A number plate is on the front bumper while the Citroën monogram is centered on the rear bumper.

There is also the presence of a fun variant of 11HP 1936, as amended camouflaged in colorful orange yellow and green was associated with a hood and a black back. This Norev was sold with a car and delivery truck wheel well disguised, was among the vehicles included in this truck. I do not think they were sold separately.

There are still a multitude of plastic wheel sold under the brand CLE it is readily available for a few francs, provided that one is not too demanding when the fidelity and quality of the model. It would be tedious to list those variants whose POLICE style, big enough and perhaps the most interesting.

Turning to finish Solido who very belatedly offered customers a 15HP, which although very modern, has strong qualities ... Traction 15 SIX 1939 was born in 1974, and we must recognize that it was a small event. The achievement is superb, the black paint is very beautiful, the wheels are realistic and lighthouses; the calender and the rear part with the location of the license plate are also very successful. The interior is gray, the wheel has three branches is quite true and the overall shape is more qu'évocatrice.


Solido will append two later variations on this model, a 15 FFI and PARIS FIRE.

One and the other are attractive the FFI seems very realistic and reflects a good idea, camouflage is successful, grille, headlights, bumpers, wheels and side green signs are glaring truth.

The same qualities are found in the fire model "CITY OF PARIS", superb in his red livery. The only drawback to this series of Traction, is that the wheels of the interior are considered a little "junk" and the tires seem a little too wide, the more they are smooth; but these criticisms are worth especially when the car is viewed from below, which is, admittedly, not very serious compared to the overall qualities.