In the early 50's and until about 60, the company Meccano Liverpool marketed in the United States a small series of finished models in army green with the letter M for "Military" in the reference suffix.


Note that this is in any case of civilian vehicles taken from the normal range of Dinky Toys and decorated in khaki, sometimes with military markings (Jeep, Ford) sometimes quite anonymously. This element is curious when you consider that at the same time the Liverpool catalog included the excellent series 153 and 670 with the many typical military vehicles, painted in the colors of the British regiments (olive green body with escutcheon).

In total the series "Special US" does not includes six models, if one ignores variations, here is a list and description: 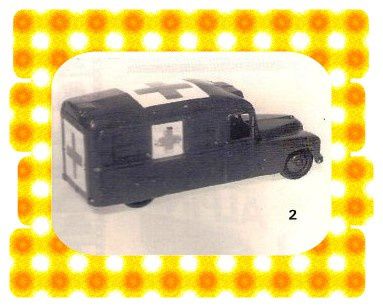 Like Ford, Daimler will be sold in a box of six, then individual box, with floor to small and big engraving and with smooth and ribbed tires. But I do not think the US version ever had ice, but I can not say ... Only the headlights are painted silver, while the roof and back are decorated with a large red cross on a white background, painted stencil. The civilian version is available in white and cream more or less dark. First comes with slick tires and former small base plate engraving, box of 6 pieces, the khaki Fordor is brilliant with a star circled on the roof, and two small stars on the front doors in white decals. Then the US will be finished in matte khaki with large engraving, ribbed tires and yellow individual case without artwork (left model of 1958).

Recall that the civilian version was produced in one color green, yellow, red and caramel, then pink and blue two-tone; cream and red; Each time distribution of distinct paints. Maybe he is a 25YM variant with smooth tires and floor stamped 25Y but here matte khaki version with star circled on the hood and stars on the sides, ribbed tires and individual wearing the yellow holster particular reference 669. This model very rare, while his sisters civilian green or red are common. Note however that civil orange color with plastic wheels is not very ordinary ... The Dinky Toys featured on this picture belongs to the first generation of Bedford since the right fuel tank is not covered by the frame. Also the tires are smooth and the floor has old type of entries; that is to say small. This is a fixed bucket identical to the civilian version usually decorated in pale green. The grille is painted in khaki and only the headlights are highlighted in silver. This model was sold in a box of six pieces and I have no information to assume that it was delivered after 1954, in an individual case as a new reference. 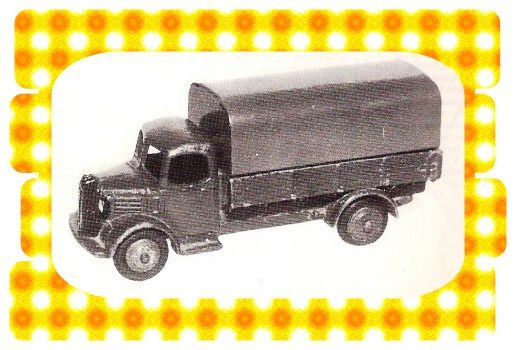 In this model, there are also two variants which are distinguished by color, glossy or matte, and the floor is completely smooth or engraved 30S. The grille is painted black with silver lights and the cover sheet is finished in the same color as the truck. Ostensibly the wheels are always shod slicks. Sold in boxes of 6 pieces. It is not rare here 37C SCR dispatch rider before the war but a militarized version for solo USA policeman, usually decorated in navy blue. Finished in khaki for motorcycle and light brown for the character. Dinky Toys This is extremely rare. His black tires definitely classify as post 1950, as well as the lack of detail on the face, and the lack of detail on the face (or eyes or mouth out painting).

The 1958 catalog, USA editions, also comprises French models (constellation type Panhard Esso) illustrations of Fordor and the Jeep that had to be the last survivors of the 1960 US Army series.